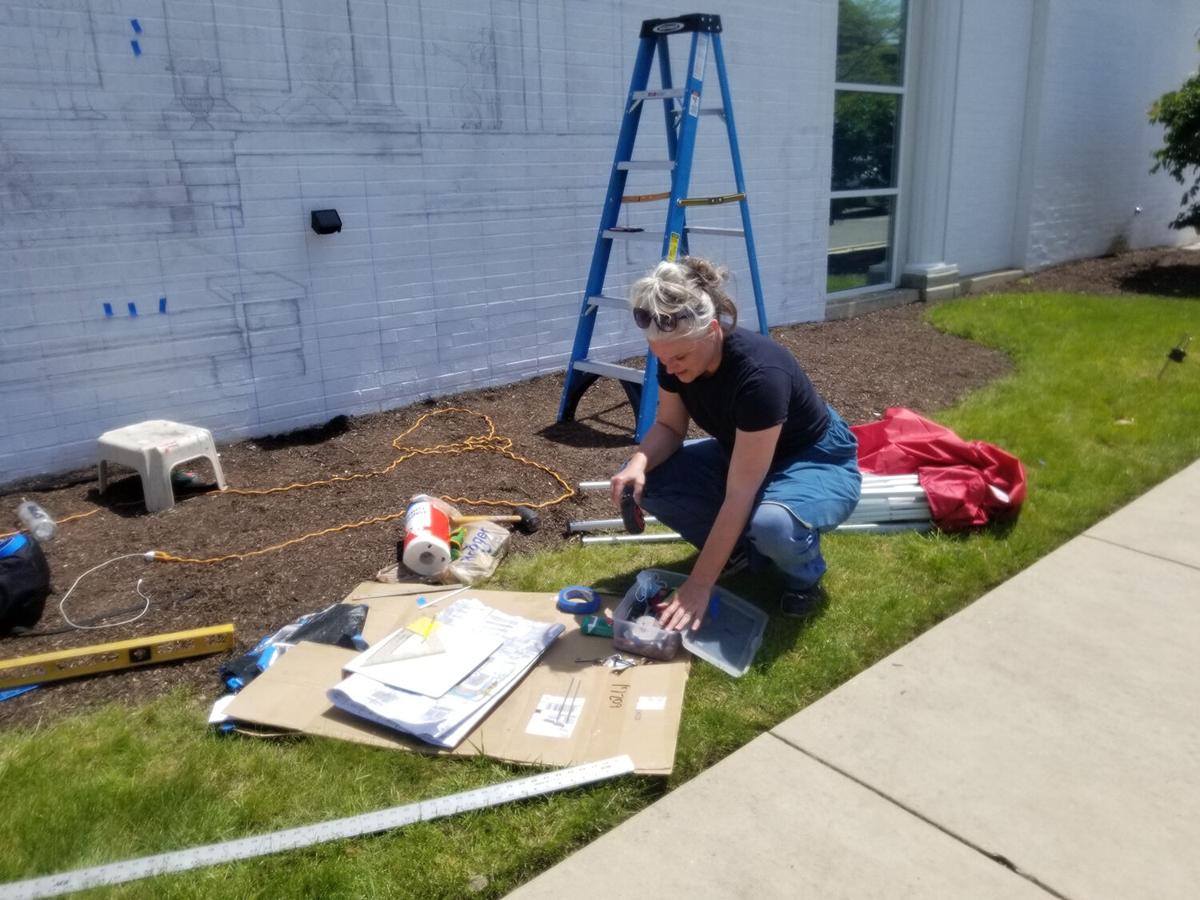 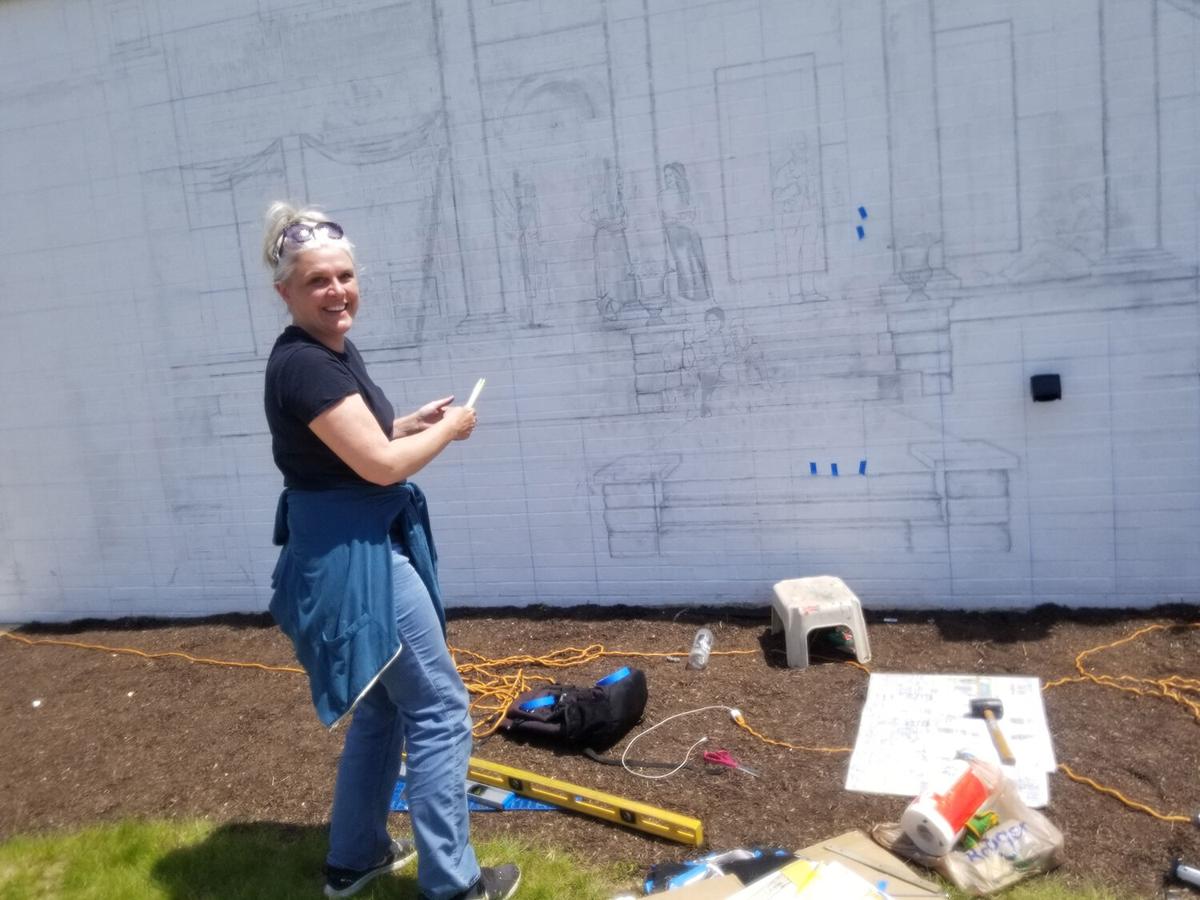 SHELBY — A brushstroke at a time, history is unfolding outside the Marvin Memorial Library.

A historic-themed mural is being created on an outdoor wall of the library, an artistic project expected to span at least 6 to 8 weeks.

“This is kind of a snapshot of what things might have looked like when Daniel Marvin was still alive,” artist Wendy Morrow said May 18 during a break from drawing and sketching out the mural’s features. “This mural pays homage to his legacy.”

Work began in early May as part of a team effort by Morrow and her husband, Joel, of the Mansfield area.

The project originally was planned for 2020, but the global coronavirus pandemic delayed the work by a year.

The mural’s time period is around 1900, give or take a few years or so.

“It’s kind of historical fiction,” Morrow said in discussing the mural’s Shelby features. “What it might have looked like in the 1900s. We kind of gave it a patriotic theme with the bunting and everything. There’s a lot of kids and families…Our mural will have 29 people.”

“This is paying respects to Mr. Marvin and his legacy kind of as the founder of this whole idea,” Morrow said. “That is why it is called Marvin Memorial Library.”

Morrow spoke of extensive historic research conducted before the mural was started. It spanned at least a month-and-a-half.

The historic research led to a reference-book binder full of written materials, historic photos and other items including a look at what people were wearing at the time in terms of attire.

“There are going to be figures in the front that are about 5 feet tall, and they are kind of walking along the sidewalk here,” Morrow said of mural features. “You can’t really tell yet.”

Since the library building’s original section is on the National Register of Historic Places, the mural’s proof needed approval.

“So it had to be approved by two boards,” Morrow said, including the library’s board of directors and the Shelby Historic Preservation Commission. “It had to be very specific historically, accurate, in order to paint on this building.”

“That is why I have done so much research, why my reference book is so enormous is because I wanted to make sure it was accurate,” she added.

Morrow spoke of the material used for the mural.

“It’s exterior acrylic paint, and then it will be graffiti-proofed after everything is approved,” she said of the library.

The Morrows also created the Castamba Theater mural along Main Street in downtown Shelby in 2019. Work on that project led to the library mural on an exterior wall of the library near the parking lot and the building entranceway.

“They saw us working on that (Castamba), and they were interested in commissioning us” for the library, Wendy Morrow said. “Between the Castamba and this, I did one at American Legion. I did their whole hallway. I finished in January of 2020 and then everything shut down two months later” due to the pandemic.
As the library mural takes shape, Morrow described the process as a “slowly but surely kind of thing.”

“It is taking a while to get everything right,” she said. “But will be framed and (have architectural) features like you are walking back into time. That is why there is kind of a three-dimensional aspect. That’s kind of how Castamba is, too. It looks like you can walk in.”

Marvin Memorial Library Director Kathy Webb spoke of the significance of the mural, which she said may depict a children’s storytime outside the front of the library.

“We stuck with the historic context because that is very much a part of our building and our town and yet it is bringing out Daniel Marvin who purchased the historic house, which became the library, Carrie Marvin, who was the head of the Shelby reading room in 1897.”

“It’s depicting adults and children and just a range of people in the community,” Webb said. “It is special to us.”

She noted that the Marvin Memorial Library has an endowment fund that allows the creation of a project such as the mural.

“It’s not coming out of operating expenses,” Webb said. “But it is a fund for special projects. Coming out of this COVID-era, we wanted to present something fresh and exciting for our community. This was the time when we can do it.”