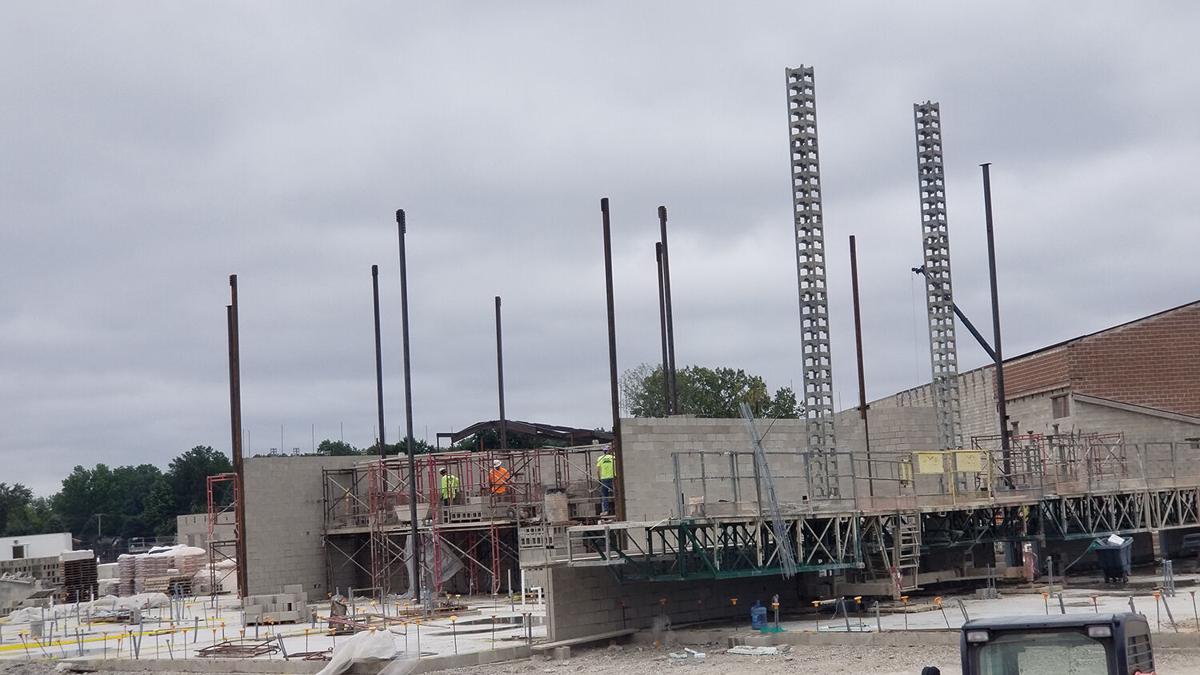 Progress is continuing at the site of the new pre-kindergarten-through-eighth grade school that is under construction in Shelby. The site is behind the current Shelby Middle School. A post-Labor Day 2022 opening is envisioned for the new school. The future Shelby Whippets athletic complex is scheduled to open in 2023. 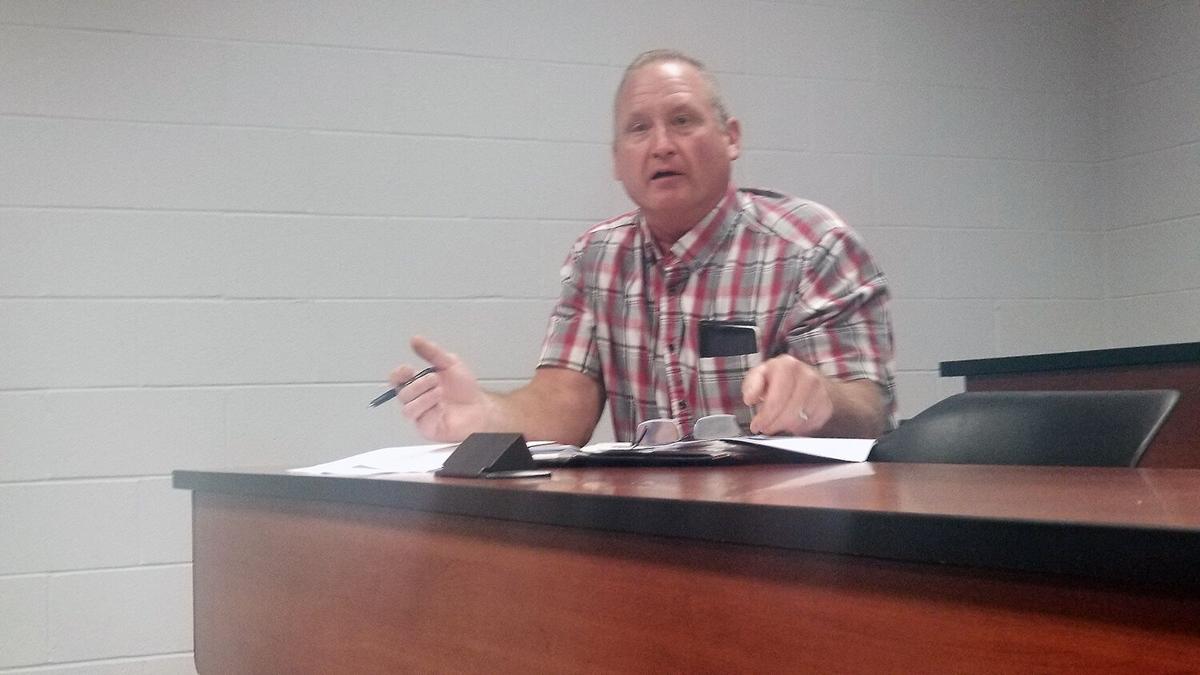 Scott Harvey, the Shelby school district's director of buildings, grounds and safety, provided an update at the Sept. 20 Shelby Board of Education meeting. 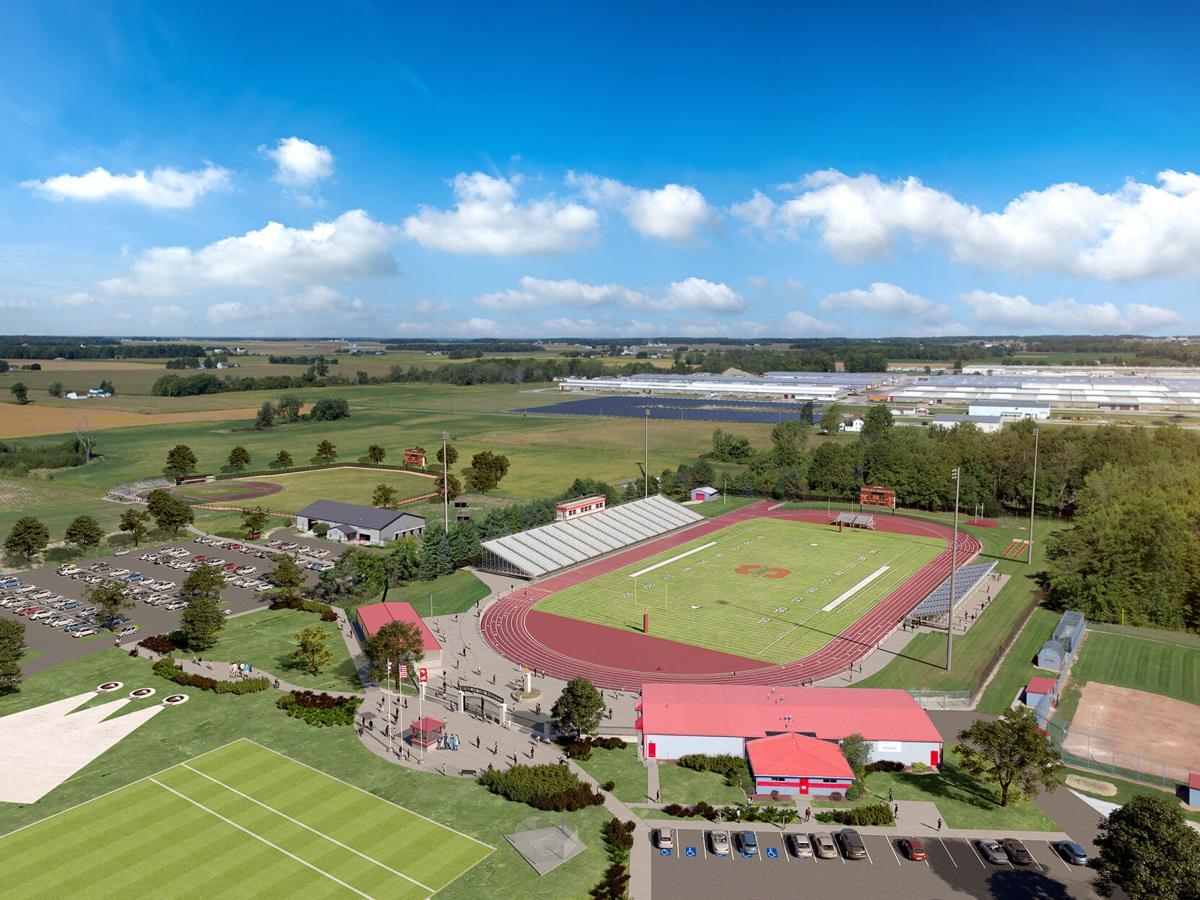 A rendering of the planned Whippet athletic facility that is to be built on the campus of Shelby High School.
1 of 3

Progress is continuing at the site of the new pre-kindergarten-through-eighth grade school that is under construction in Shelby. The site is behind the current Shelby Middle School. A post-Labor Day 2022 opening is envisioned for the new school. The future Shelby Whippets athletic complex is scheduled to open in 2023.

Scott Harvey, the Shelby school district's director of buildings, grounds and safety, provided an update at the Sept. 20 Shelby Board of Education meeting.

A rendering of the planned Whippet athletic facility that is to be built on the campus of Shelby High School.
SHELBY — Signature construction projects of Shelby City Schools are continuing their momentum as fall arrives, officials monitor progress of current work on a new school and lay the groundwork for the future Shelby Whippets athletic complex.
The pre-kindergarten-through-eighth grade school, under construction behind the current Shelby Middle School, is scheduled to open in September 2022. The separate $4 million Whippets athletic complex is anticipated to debut in 2023 on the Shelby High School campus.

When the Whippet complex is complete, it is to include features such as a new football/soccer venue, baseball and softball fields and refurbished tennis courts and track. It also is envisioned to serve the marching band for events such as band shows, and Shelby students in general for gym class, for example.

Providing the latest information on the projects are Superintendent Tim Tarvin and Scott Harvey, the school district's director of buildings, grounds and safety.

“Things are going really, really well,” Tarvin told the Shelby Board of Education in an update Sept. 20.

Earlier in the day he had met with the Ohio Facilities Construction Commission, construction manager Adena Corp. of Mansfield and Garmann Miller, the Minster, Ohio architectural and engineering firm that designed the new Shelby school.

The project’s timeframe was adjusted earlier this year as officials awaited the arrival of a specific type of steel for portions of the building.

At the school board meeting, Board of Education President Lorie White inquired about the status of the steel. “Do we have it?” she asked.

“We haven’t got the decking,” Tarvin responded.

Harvey added that the bar joists arrived last week. “They are setting them right now so that when the decking gets here, they can just go right at it,” Harvey said, adding that the decking is expected Oct. 11.

“They’re going to put it on and start pouring,” he added.

Groundbreaking for the new school was held last fall with planning in the works long before that time.

Mrs. White said: “The stars aligned for us with all of this, with our financing…”

“This is their forte,” Harvey said of Vasco. “They are one of the only companies around that can do all of the venues with their expertise. They can do turf, track, tennis. That is very hard to find.”

Some of the financial numbers came in below price estimates that are nearly two years old, he said.

“A lot of negotiation, a lot of back and forth for quite some time to get them down to where we felt comfortable,” Harvey told the school board.

In addition, the board approved $157,490 for Kelstin Construction for a retention pond involving the future football field stadium complex.
The pond is to be north of the track. That was not part of what officials had originally talked about, Tarvin said. Two other retention ponds are planned for the athletic complex, as well.

“The nice thing is there won’t be any neighbors saying they’re getting extra water because they’re not,” Harvey said in remarks. “Some of these retention ponds we probably, maybe, should have had, could have had in the past, especially the baseball area, that low area there.”

Involving football area retention pond costs, Harvey noted that expenses are being reduced in other parts of the overall athletic complex project plus almost $950,000 in community donations. “This is where they’re helping us out tremendously with all of their donations,” he said.

As for the track, officials had held off redoing it in the past because “we had envisioned someday building a stadium,” Harvey said.

“The track should have been done five years ago, but I would tell you guys (school board) let’s hold off because hopefully, we’re going to do this (football stadium) project. It came to fruition, which is good because we don’t want to tear up a new track…The same with the tennis courts.”

The track work is planned for this coming summer. “But we still won’t be playing football until ’23" at that site, Harvey said.

After the meeting, Harvey noted that the track work involves more than resurfacing.

“That includes the pole vault pit, long jump,” he said. “Those will be relocated. Because of the new turf, they won’t be able to be inside the field anymore.”